I realized I’ve been posting a lot of wall decor lately, but along with changing things up in my home, I am also planning a small makeover for my daughter’s dorm room. This laser cut paper wall art I’m showing you today will be part of that makeover.

For any dorm room or temporary living situation, I like to go as budget friendly as possible. For instance, when my older daughter was renting a college house with three other girls, I made over their drab living room for only $150. That is still one of my favorite makeovers to date. I plan to do my younger daughter’s bedroom for far less than that, using as much as I can that I already have.

What You Will Need:

Cricut Machine (I have the Explore Air 2)

I was looking around in the Cricut design space* specifically for something I could make with my Cricut machine to look laser cut art and found the perfect thing to do so. It’s called Flower 3D Wall Art, but it has the laser cut paper look I was thinking of.

Many designs are free, but this one wasn’t. It only cost $0.99 so I did buy that design. I opened it up in the design space and adjusted my setting to cut on cardstock. I’ve used the vinyl Cricut materials several times, but this was my first time trying out the cardstock. The cardstock is sized 12 X 12, which is the same as the Cricut mats.

Forgive the color on this next picture, I did the project at night so some of them are terrible. This is how it looked when it was done being cut.

The next part was what worried me. I  get more stressed over small projects like this than large ones for some reason. I’ll come to paint your kitchen counters without hesitation, but peeling this cardstock off without ripping it had me sweating, lol. Luckily, it was very easy to do. I just slid this handy spatula tool underneath and slowly peeled it up. 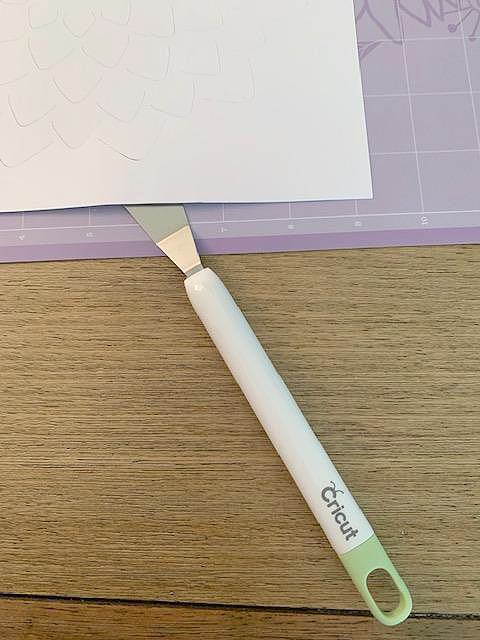 Once I had it off the mat,  I used a pencil to lightly curl each of the flower “petals” around it. That small step is what gave it a more defined laser cut or 3D look.

Next all that’s left to do is frame it! For the frame, a shadowbox style is best for this. I really lucked out and hit Michaels when they were having a huge sale on this 9 X 9 shadowbox frame as well as the cardstock I needed. The frame alone is normally priced at $23 but I spent a total of $13 for both! The cashier was even impressed, she said she’s never seen the cardstock discounted that much before. I believe the cardstock is less expensive when you buy it directly from Cricut.

The picture of the project in my mind was white on white, which works considering I don’t know what else I’m using in the dorm bedroom makeover at this point.

It’s hard to see in the photo above, but the background in the frame is a nice off-white color with lots of texture. I like the idea of that peeking through all the white. You can see it better in the photo below.

My daughter liked it so much when she saw it she said I should sell them. 🙂  I don’t plan on doing that any time soon but it was a nice compliment.

What do you think? Do you like the white on white or would you have used more color?

*This post may contain affiliate links, you can read my full disclosure here.

This site uses Akismet to reduce spam. Learn how your comment data is processed.

Sign up to have new posts delivered to your inbox & receive my free eBook!

Welcome! I'm Roxanne, The Honeycomb Home is my blog for home decor enthusiasts.  Here you will find design inspiration, how to create a home you love on a budget, tricks for making the most of a small space, and much more!   Click the banner above to learn more.

How To Choose Paint Colors eBook!